Women want and can successfully cope with their athletic obligations

Those who usually say that womens primary function is to cook and clean are deeply mistaken. Gone are the times when womens role was limited to household chores. 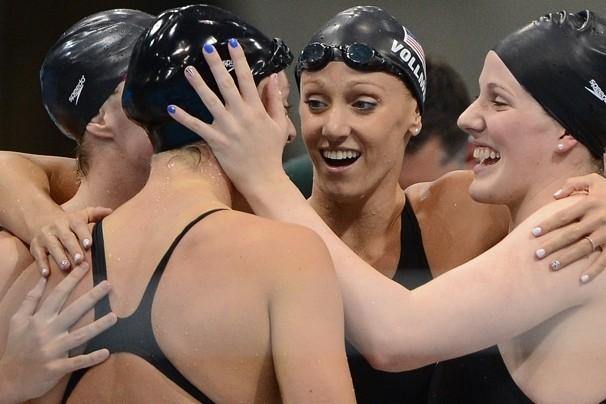 Todays Olympic Games tell the opposite truth: women want and can successfully cope with their athletic obligations. Just take a look at what our women have accomplished during the few days of the summer Olympic games, and you will realize the role which we, women, play in modern sports.

(borrowed from the Washington Post)
These Olympic Games can be fairly called the triumph of female swimmers. Dana Vollmer, Missy Franklin, Allison Schmidt, and Shannon Vreeland  these women have accomplished almost impossible things in a challenging competition with other talented athletes from all parts of the world. The four women represent the importance of support and solidarity among female athletes. Most probably, you wont see anything like this beyond sports. Women are used to competition. They are born fighters. This is why they often spend their lives in isolation from other women, but not in sports, where the team spirit is the main factor of athletic success.

It seems to me that, during serious athletic competitions, women test themselves and other women for friendliness, supportiveness, and compatibility. Yes, compatibility, because women who work as part of a team but cannot find any agreement between themselves will hardly achieve any real success. Moreover, it also seems to me that, for many women, participation in a contest as serious and outstanding as the Olympic Games, is more than a matter of sports but also a good way to tell the whole world that women can do everything, even the most impossible things. One of such impossible things is working in a team towards a common goal  a thing which is much rarer among women than men.

Most women spend their lives in a paradoxical situation: they experience envy when they see other women successful, but they fail to compete with those women on equal terms. The main reason is that many women simply have no confidence of their own talents and strengths. The Olympic Games is the event for a few, not for everyone. Only the most talented and willing to win can participate. Women who have no confidence in their own talents and potentials will hardly ever achieve the highest level of professionalism; as a result, they are left to be envious about other womens victories.

In this atmosphere of competition and enviousness, the most striking is the fact that women-athletes successfully preserve their team spirit and commitment to their common goals, and even despite certain difficulties and even failures, they do not lose these unique personal and professional ties. These are women who value professionalism over individual complexes. These are the women who give up their complexes for the sake of a higher goal. These are the women who have learned the pain of failures and know what it feels to be worse than others. These are also the women who know the taste of accomplishment and can successfully move to achieve their ideal.